DrRock.comHome of the best music ever made!
Home Deaths On the Stairway to Heaven: Notable Deaths in August 2020 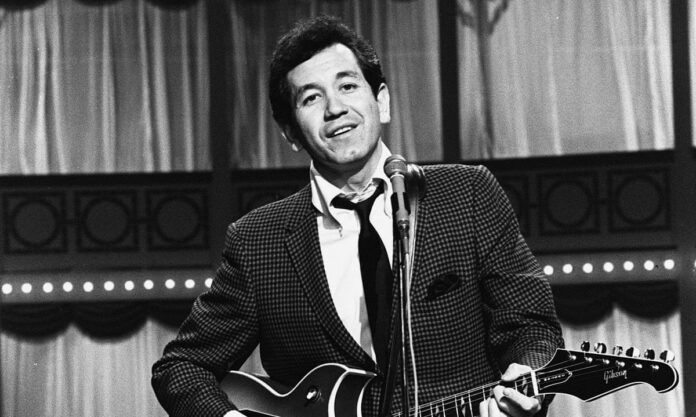 August 03
● Michael Smith / (Michael Peter Smith) → Chicago-based Americana/folk singer and songwriter with over 500 compositions, many of which were recorded by others, including Jimmy Buffett, David Soul and Jerry Jeff Walker, best known for penning the folk classic “The Dutchman,” covered by Steve Goodman (1972) and on nearly two dozen other recordings over the years, died from colon cancer on 8/3/2020, age 78.
● Billy Goldenberg / (William Leon Goldenberg) → Emmy-winning composer and songwriter with a long career writing TV themes songs, Broadway musicals and film scores, including Steven Spielberg‘s Night Gallery series, Rhoda and Kojak pn TV, and Woody Allen‘s Play It Again, Sam on stage, most noted for being musical director of Elvis Presley‘s 1968 televised concert “Elvis: The Comeback Special,” which led to Elvis‘s penchant for big band orchestration in his last years, died from suspected heart failure on 8/3/2020, age 84.

August 06
● Wayne Fontana / (Glyn Geoffrey Ellis) → Frontman for British Invasion pop-rock band The Mindbenders (“Game Of Love,” #1, 1965), then solo (“Pamela Pamela,” UK #11, 1967), took his stage name from D. J. Fontana, Elvis Presley‘s longtime drummer, dropped out of the music scene in the 80s, suffered from alcoholism and financial troubles in the 90s and 00s but returned to perform on the oldies circuit until just prior to his death from cancer on 8/6/2020, age 74.

August 09
● Martin Birch → British musician and studio sound engineer on dozens of recordings by top UK hard rock acts in the 60s and 70s, including five early Fleetwood Mac albums, eight by Deep Purple and three by Wishbone Ash, among others, in the late 70s and 80s moved up to produce or co-produce additional Deep Purple albums, nine by Whitesnake, ten by Iron Maiden and over two dozen more by Jeff Beck, Blue Öyster Cult, Rainbow and others, retired in 1992 and died from undisclosed causes on 8/9/2020, age 71.

August 11
● Trini Lopez / (Trinidad López III) → Chicano singer and guitarist with a unique blend of American folk, rockabilly and Latino music that produced 15 adult contemporary Top 40 hits and his million-selling signature song, a danceable version of “If I Had A Hammer” (#3, UK #4, 1963) through the 60s, performed on Vegas stages and world tours in the 70s and 80s, issuing more than 60 albums, including an ill-fated disco record in 1978, occasionally acted on screen several smaller roles, the most notable being as one of The Dirty Dozen (1967), continued to record and perform through the early 10s, died from complications of the COVID-19 virus on 8/11/2020, age 83.

August 13
● Pat Fairley → Co-founding member and six-string bassist for 60s Scottish pop-rock Marmalade (“Reflections Of My Life,” #10, UK #3, 1970), quit the band in 1972 to run its music publishing company, then moved to Los Angeles about 1979 and joined RSO Records as publishing manager and prog rock Yes as session bassist, opened a Scotland Yard-themed restaurant in the 80s in L.A., retired in 2018 and died from undisclosed causes on 8/13/2020, age 76.
● Steve Grossman / (Steven Mark Grossman) → Jazz and hard bop saxophonist who joined Miles Davis as a teenage sax phenom in 1969 and appeared on several groundbreaking jazz-rock fusion albums in the 70s, later played with Elvin Jones, fronted his own groups and collaborated with other jazz notables through the 10s, died from cardiac arrest on 8/13/2020, age 69.

August 14
● Pete Way / (Peter Frederick Way) → British hard rock bass guitarist known for pushing the edge of rock excesses, especially for a bass player, co-founded proto-metal UFO in 1968 and registered eight US and five UK charting albums, including Mechanix (#80, UK #8), before departing in 1982, briefly played with hard rock Fastway and Ozzy Osbourne‘s touring band before founding hard rock Waysted later that year, rejoined UFO and stayed with the band until retiring in 2008 for health reasons, played in several hard rock projects in the 10s and wrote an autobiography in 2017, sustained life-threatening injuries in an accident of undisclosed causes and died two months later on 8/14/2020, age 69.

August 18
● Jack Sherman / (Jack Morris Sherman) → Lead guitarist and co-songwriter for alt-rock Red Hot Chili Peppers on the band’s 1984 eponymous debut LP and first tour, co-wrote songs on the second album but left the band before it was released, worked with Bob Dylan, George Clinton and others, and provided backing vocals on two subsequent RHCP albums but was snubbed by the band for their induction to the Rock and Roll Hall of Fame in 2012, died from natural causes at home on 8/18/2020, age 64.

August 20
● Frankie Banali → Drummer and manager for multi-platinum heavy metal/pop-metal Quiet Riot and the Top 10 hit, “Cum On Feel The Noize” (#5, 1983) from the band’s LP, Metal Health (#1, 1983), the first heavy metal album to top the Billboard 200 chart, following the band’s dissolution in 1989 toured and recorded with several heavy metal acts and with his own bands, rejoined Quiet Riot for three stints, the last of which included the band’s fourteenth studio album, Hollywood Cowboys (2019), died from pancreatic cancer on 8/20/2020, age 68.
● Justin Townes Earle → Alt-country singer, songwriter and guitarist, son of outlaw-country rocker Steve Earle and namesake of country-folk balladeer Townes Van Zandt, issued eight LPs after his 2007 debut EP, Yuma, and received the Americana Music Association‘s Emerging Artist of the Year award for 2009 and the Song of the Year award for “Harlem River Blues” in 2011, followed his father into drug and alcohol addiction and died from a suspected drug overdose on 8/20/2020, age 38.

August 21
● Walter Lure → Second guitarist and co-songwriter in seminal New York punk rockers Johnny Thunder & the Heartbreakers (one studio LP, L.A.M.F., 1977 and several live albums), left the band in 1978 but returned for several stints in the 80s and 90s, formed his own punk bands and eventually became a Wall Street stockbroker, wrote an autobiography of his experieces, To Hell And Back in 2020, diagnosed with liver and lung cancer in July 2020 and died less than two months later on 8/21/2020, age 71.